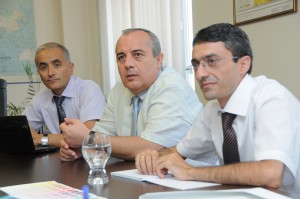 Shen Holding dates back to 1970 when the largest enterprise for state supplies of non-ferrous metals (“HayGunMet”) was established. In 1995, the latter was privatized and transformed into Shen Concern CJSC. Having merged with Huntsman Building Products, Shen Concern was converted into Shen Holding which nowadays encompasses Shen Concern CJSC, Huntsman Building Products and Shen group.
Prior to 1999, Shen Holding was into importing and selling construction materials. Thereafter, the management made a strategic decision to develop Armenian manufacturing, to contribute to the development of the domestic labor market. As a result, the company established the first production facility of its own, and is nowadays a major manufacturer of construction materials in the Republic of Armenia.

In 1999, the company established the first plant to produce dry mixtures in Armenia.In 2000, the plant to produce paints and varnishes was commissioned; it was designed to manufacture environmentally friendly construction paints in conformity with international standards.In 2003, Shen Concern was granted a license by the Ministry of Economy to operate a gypsum mine, and in 2010, overburden removal on the mine started.In 2005, Shen Concern CJSC built and commissioned a new facility to produce concrete blocks for industrial and household purposes. In the meantime, other production facilities were upgraded and enlarged.In 2007 and 2009, respectively, Shen Concern commissioned Shen Textile and Shen Décor stores to sell imported goods for interior furnishing from leading European manufacturers.Since 2008, Shen Concern has launched construction and renovation works using both imported materials and the ones of its own production.Since 2008, Shen Concern has also started the implementation of architecture and design projects.Since 2012, the company has added a real estate agency to the long inventory of its activities.To-date, Shen Holding has created over 500 jobs.